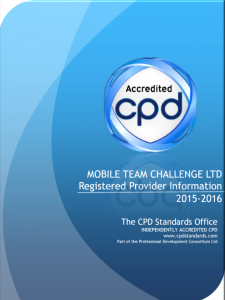 NOW with Myers Briggs or Emotional Intelligence Profiles at £30.00 + VAT per delegate

A variety of bespoke Workshops that demonstrate the way to unleash collective potential power in Teams in order to maximise their effectiveness and to give them a competitive edge. The sessions explore Team dynamics, Team psychology, Shared Visions/Goals and Belbin models whilst also building trust, confidence, motivation and morale and utilises innovative Coaching techniques in the pursuit of Team Excellence and effective Teamwork.

This course combines adventure experiential learning and self awareness techniques – either at our Adventure Centre or on-site. The course refers to Patrick Lencioni’s “The 5 Dysfunctions of a Team” and also Dr Stephen Covey’s “The 7 Habits of Highly Effective People”.

The 5 Dysfunctions of a Team: Patrick Lencioni

Patrick Lencioni has been described by the One-Minute Manager’s Ken Blanchard as “fast defining the next generation of business thinkers.”

His passion for organisations and teams is reflected in his writing, speaking and consulting. He is the author of five business books, including The Five Dysfunctions of a Team, which continues to be highlighted on The New York Times, Business Week, Wall Street Journal and USA Today best-seller lists

Pat’s work has also been featured in numerous publications such as Fast Company, INC. Magazine, USA Today, Entrepreneur, Drucker Foundation’s Leader to Leader and The Harvard Business Review and this module will encourage delegates to carefully consider Lencioni’s 5 dysfunctions of Teams. 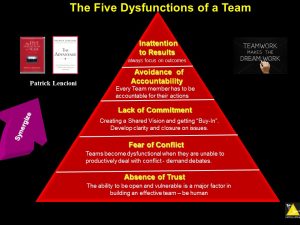 In brief summary, the 5 principles are as follows:

The first dysfunction is the absence of trust amongst team members. The type of trust the author is talking about here is the ability of group members to show their weaknesses, to be vulnerable and open with one another. Trust is never generated in teams when the team members are not prepared to be vulnerable. Instead they feel the need to be right, to be strong and competent, so much that they are unable to be vulnerable and open with one another. Trust requires that team members have confidence in each other intentions, that they are good and therefore have no reason to be protective and careful in the team. The when I ‘m vulnerable it will not be exploited and used against me by the team. The lack of trust amongst teams is a huge waste of time and energy as team members invest their time and energy in defensive behaviours, reluctant to ask for help and to assist others.

The key to overcoming a lack of trust is shared experiences, multiple follow-throughs and integrity. In the fable the team completes a Myers Briggs assessment to get the team talking about one another’s strengths and weaknesses and so become comfortable with one another. There are many other personality profiling tools and activities available and one of the more simple concepts is to understand the diversity of personalities and characters by considering the 6 “Types” as described in Edward DeBono’s Six  Thinking Hats. 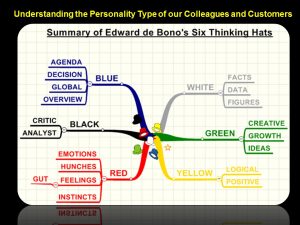 “…teamwork begins by building trust. And the only way to do that is to overcome our need for invulnerability.”

Trust is the foundation of great teams and its trust that makes team conflict possible. Teams become dysfunctional when they are unable to productively deal with conflict. All meaningful relationships require productive conflict for them to grow. Healthy conflict occurs when people talk about the issue at hand avoiding personal attacks, looking for the best solution for the team. Teams tend to avoid conflict often replacing it with an artificial harmony.

We wear masks and focus on being nice to everyone. However, productive conflict is required for teams to become functional. This allows for meaningful dialogue where people are open to share, without feeling fearful of reprisal or criticism. One of the worst team dysfunctions is when you have a team of “yes men”.

Leaders need to encourage debate, support it and keep it productive. Teams who avoid conflict spend much time “off-line” never making decisions that the group can commit to. Healthy and productive teams accept that conflict is a normal part of being in a team to learn to deal with it productively.

“…meetings and movies have a lot in common…A movie, on average, runs anywhere from ninety minutes to two hours in length. Staff meetings are about the same…And yet meetings are interactive, whereas movies are not…And more importantly, movies have no real impact on our lives…. [And]…Every great movie has conflict. Without it, we just don’t care what happens to the characters.”

When working with teams leaders need to understand the importance of conflict in teams, being careful not to try and steer the team towards premature resolution of conflict with the intention of protecting people. It’s important for leaders to help the team members to learn and develop positive conflict resolution skills. The beast way to do this is for leader to “lead by example”, modelling the appropriate behaviours, rather than trying to smooth over the conflict.

What Leaders and their teams must do is learn to identify artificial harmony when they see it, and incite productive conflict and resolution in its place. As Bruce Tuckman identified, every Team goes through a “STORMING” stage in its dynamic evolution and this frequently manifests itself as “conflict”.

When teams engage in productive conflict they can confidently commit and buy-in to decisions. Commitment is a function of clarity and buy-in. Productive teams make clear decisions and are confident that they have the support from every team member. A lack of commitment usually arises from not hearing all the teams concerns before making a decision. There can be no commitment without debate. People will not buy into something when their opinions and thoughts on the matter were not included and discussed. “If they don’t weigh in, then they won’t buy in.” This is not as much about seeking consensus as it is about making sure that everyone is heard.

“The point here is that most reasonable people don’t have to get their way in a discussion. They just need to be heard, and to know that their input was considered and responded to.”

At the end of the day everyone needs to get to the point where they can say, “I may not agree with your ideas but I understand them and can support them.”

“When people don’t unload their opinions and feel like they’ve been listened to, they won’t really get on board.”

Leaders can help to facilitate commitment by reviewing all key decisions made at the end of team meetings, making responsibility and deadlines clear.

Without team commitment you cannot have accountability. If the team is to be accountable, everyone must have a clear understanding of what is expected of them.

“People aren’t going to hold each other accountable if they haven’t clearly bought in to the same plan.”

At the end of the day it’s about each team member being accountable to the team. This means that a team member never lets the team down when it comes to meeting commitments. The team needs to hold their peers responsible for achieving results and working to high standards. It’s the responsibility of each team member to hold one another accountable and accept it when others hold them accountable.

It’s often the case, that when teams are not holding one another accountable it’s usually because they’re not measuring their progress. It’s important to make clear what the team’s standards are, what needs to get done, by whom and by when. Ambiguity is the enemy of accountability.

When teams are not held accountable the team members tend to look out for their own interests, rather than the interests of the team. A healthy team places team results as the most important goal. When all team members place the team’s results first the team becomes results orientated.

“Our job is to make the results that we need to achieve so clear to everyone in this room that no one would even consider doing something purely to enhance his or her individual status or ego. Because that would diminish our ability to achieve our collective goals. We would all lose.”

Leaders need to make the teams results clear for all to see, rewarding the behaviours that contribute to the team’s results. It’s the responsibility of the leader to keep the teams focus on results.

By addressing these dysfunctions, what results, is a cohesive team….

“…and imagine how members of truly cohesive teams behave:

“The 7 Habits of Highly Effective Teams”

and an  Individual & Team Mapping

£1,450.00 + VAT for a 2 Day Programme – includes Myers Briggs or Emotional Intelligence Profiling FREE OF CHARGE including a “5 Dsyfunctions of a Team Assessment” of YOUR Team… and LOTS of in-house Team Building Activities!

What better time is there than the present to develop your team into a High Performance Team in order to take on the challenges of the current climate?

This workshop has been specifically designed:

“The 7 Habits of Highly Effective Teams” 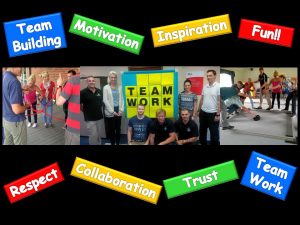 What’s with the Goose?

MTC use the goose on our logo because there are SO many lessons that we can learn from the geese to help us understand the power of teamwork. Take a look at our latest video here and see how many lessons you can learn.